Get discovered by employers. Create your
job seeker profile and resume today!

How to Address Gender Biases in the Workplace

Georgene Huang is obsessed with improving the workplace for women. She’s the CEO and Co-founder of Fairygodboss, a marketplace where professional women looking for jobs, career advice and the inside scoop on companies meet employers who believe in gender equality. Previously she ran the enterprise business at Dow Jones and was a Managing Director at Bloomberg Ventures. She is a graduate of Cornell and Stanford Universities. 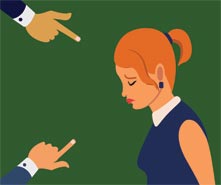 How many times have you been told to smile? If you’re a woman, chances are you’ve been told to smile — not for a picture, but just because you should be smiling — far more than you’re comfortable with. And you’ve probably heard all these cringeworthy phrases before:

“Why don’t you smile, sweetheart?”

“Nobody likes a grumpy girl.”

“You look so much nicer when you smile.”

For many women, this is infuriating. It perpetuates the stereotype that female professionals should be happy and perky. It implies we aren’t allowed to be focused or hardworking. And, worst of all, the words often come from a man trying to impose control over our feelings.

While we’d all like to think this doesn’t hurt women’s careers, it does.

My company, Fairygodboss, recently released a study in which we showed hiring professionals images of different professional women. The survey respondents were then asked to select which adjectives best described each woman and whether they’d consider hiring them.

Of the 15 images, one woman was frowning — or at least, not actively smiling — and only 17.2 percent of male respondents said they’d hire her. This just goes to show that a woman’s appearance is still harshly judged in the workplace.

While you may think you have to grin and bear it (literally), there are actions you can take to bring about change. The following steps will help you deal with the “smile, sweetheart” mentality in the workplace:

Know it’s their issue, not yours

No one has the right to dictate your emotions. If someone thinks you should act or appear a different way, that’s their problem. However, you still need to respond in a professional, communicative way. Ignoring the behavior will only continue the cycle.

Prepare a response for these situations so that you remain articulate and don’t lose your temper in the moment. Establish boundaries. Let the other person know that they’ve crossed a line in regard to how you expect to be treated. Here are some phrases to consider saying:

Customize any of these statements so that they fit your personality, and convey your feelings about the situation.

In addition, know that your male co-worker might not think he’s done anything wrong. As a result, he may get defensive and turn fault on you. He may say you’re overly sensitive or that he was just trying to be nice. Respectfully hold your ground. Repeat the fact that you want him to understand how you expect to be treated. Let him know you’re not mad, but that you’re asking him not to say something like that to you again.

Many people think going to HR is equivalent to tattling on your co-workers, but that’s not the case. The HR department is there to make sure you feel safe and comfortable at work. They need to know about situations like this, not so they can punish your co-worker, but so that they’re up-to-date with what’s going on.

HR’s job is to gather feedback from employees so they can make better decisions about the workplace. For example, if a manager tells one of his female employees to smile, this could be a sign of a larger cultural problem within the company, and the larger issue will never be resolved if HR isn’t alerted to warning signs.

Going to HR also protects you in case things escalate. By the time a conflict gets to HR, an entire series of events has happened before. Without a record of your actions beforehand, it’s your word against his.

Make it clear that you’re not trying to get your co-worker in trouble. Simply let HR know what happened and how you handled it. That way, everyone is on the same page and no one feels attacked.

To end gender bias, we have to not only talk about change, but also be proactive about effecting it. Go to your leaders with suggestions about how the workplace can improve the way women are treated. Understand that not every solution will work in every workplace. But here are a few ideas to think about:

While it may be subtle, the “smile, sweetheart” mentality is a gender bias women face every day in the office. But that doesn’t mean something can’t be done to spur change. By following these tips, you can improve the workplace for all women.

We’re building GlassCeiling.com to become a key resource for women determined to succeed in business. Whether you’re starting out or rising up, reached the ceiling or smashed through it, this is where you’ll make connections for your next step.

EmpleosAmigo.com is the job seeker’s friend in the world of online job searches. It is fast, easy and extremely helpful to anyone looking for that next great job. EmpleosAmigo.com is a 100% Hispanic-owned site committed to empowering Hispanics so that they can follow their passions and develop skills doing something they love, which is the path to professional success and personal happiness. EmpleosAmigo.com is part of Canava Communications Group, a leading Hispanic Consulting company with more than 50 years of combined experience in media and the U.S. Hispanic market.

Employers have found us to be a cost effective resource to reach experienced, reliable temporary, part-time and seasonal workers and professionals and managers seeking project assignments.

Thousands of jobs from a variety of niches.

The Best Jobs and How to Get Them

The cutting-edge book that finds you the best jobs & highest incomes.